How to Hack LUFS Normalization?

Not so long time ago we were at war, well, loudness war. Everybody was competing to sound louder than the others.

You may wonder, why people did such horrible things in the past?! Well, like in all wars, the ultimate goal was profit, money. Louder songs were perceived better. It was as simple as that.

Many brave people were fighting in this war, losing every day, but there was hope. Some really clever men started working on new technology, a technology that could end that all! It was very hard, but battle after battle we were closer and closer to the end. And one day, the end had come. It was over! We no longer needed to kill all dynamics in our music!

Musicians were living happily since then.

But, there was one villain, like in all stories, waiting to mess things around again…

After the introduction of loudness normalization on major streaming platforms, people realized that you no longer need to absolutely crush the dynamics in the song. That was a great thing, now we have an option to choose. Nowadays, almost every platform uses ITU BS 1770 standard to measure the loudness. You may know it as LUFS measurement.

I personally really like this, and my meter has influenced that move significantly by giving people an affordable or a free tool that you can use in your production compared to the very overpriced competition.

The LUFS measurement algorithm is really solid. It makes the job done really well, but like with all algorithms, if you study it enough, you will spot some loopholes.

And oh boy, I was looking at that thing for years! So, recently I was working on adding a relative gate visualization in Youlean Loudness Meter. (more on relative gate later)

While working, I got an idea. Could you manipulate the integrated loudness by knowing where exactly the relative gate is? After a few tests, it seems that you can actually do it! How amazing is that!

I may have already lost you with these terms, so let me explain it in a simple manner.

One hidden tweak is that we are discarding everything that is less than -70 LUFS. So, very quiet measurements won’t be used for the averaging.

The other tweak is the 10 LUFS relative gate. That one is a bit complicated.
Everything below that gate will be discarded for averaging.

So, how can we know where exactly that gate is?

Fortunately, there is an easy way to do that in Youlean Loudness Meter 2.

Once you turn this button on, you will see a horizontal orange line in the histogram that will represent the integrated relative gate.

Everything below the orange line will be discarded and everything above will be used for the integrated loudness calculation. 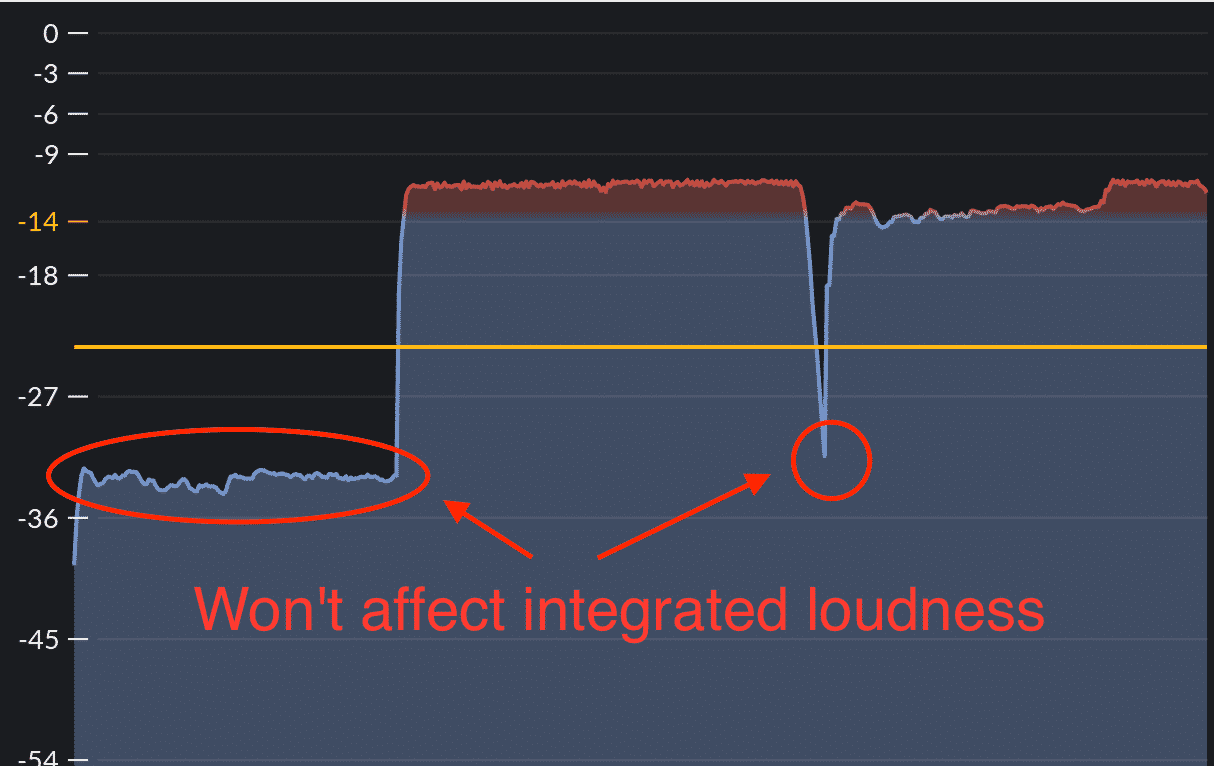 Now, let’s get back to how to hack the actual thing!

I will use a Deadmau5 – Some Chords song to teach you how to do it. I have chosen that song specifically because it will be easy to understand what is going on, but you can use any song of course.

If we analyze this song, we can see that it has -12.3 LUFS integrated loudness.

When uploaded on YouTube, this song will be normalized to -14 LUFS. 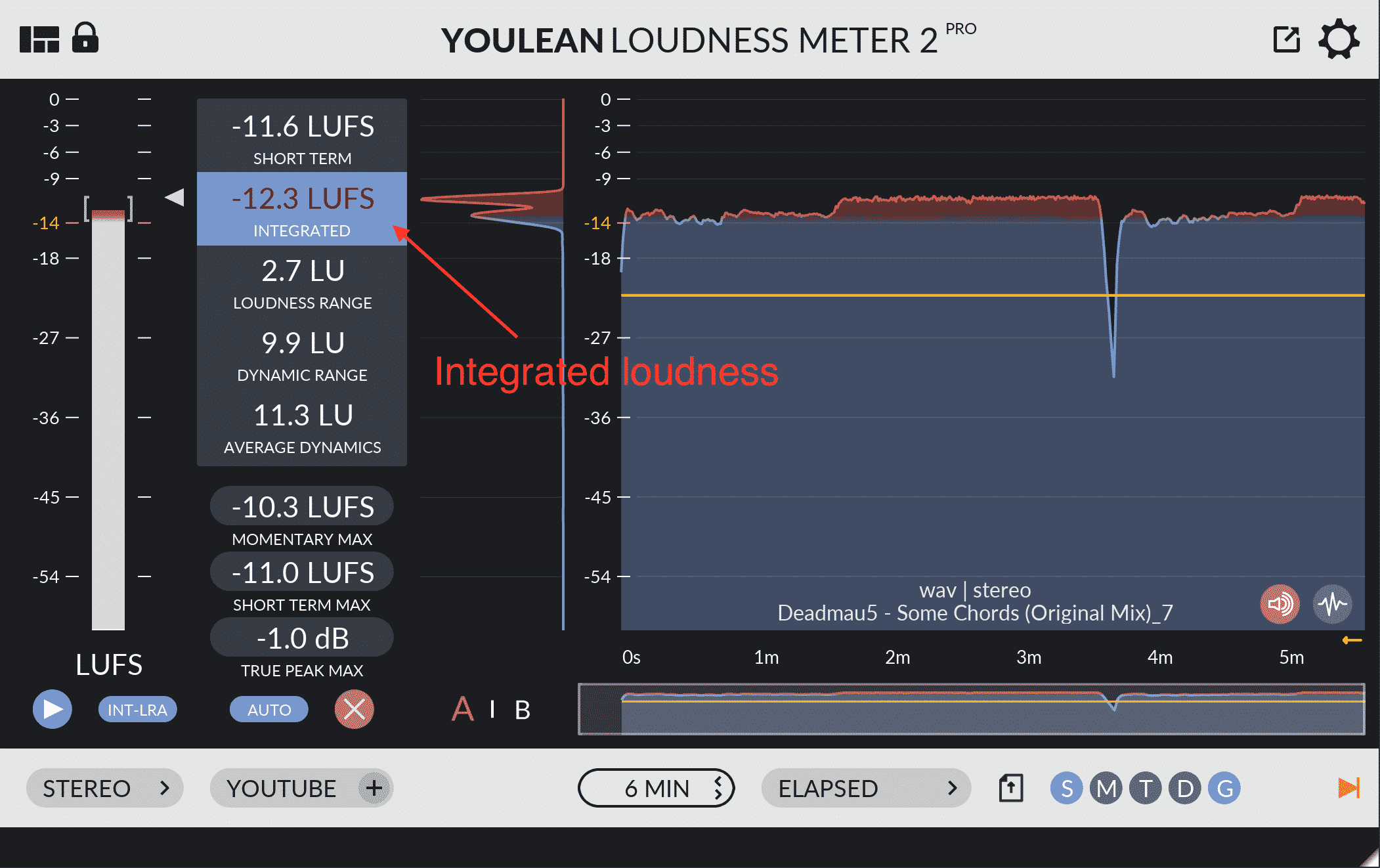 So, how to hack the integrated loudness?

Well, we want to keep our main part of the song or chorus in this case, as loud as possible, and we want to make other parts quieter, but not so quiet to go below the relative gate line.

1. Find where is the relative gate

For this you must analyze the song from start to finish. The relative gate will be moving a bit while you are hacking the loudness, so it will require some trial and error.

We can see that in this example the relative gate is around -22/-23 LUFS. 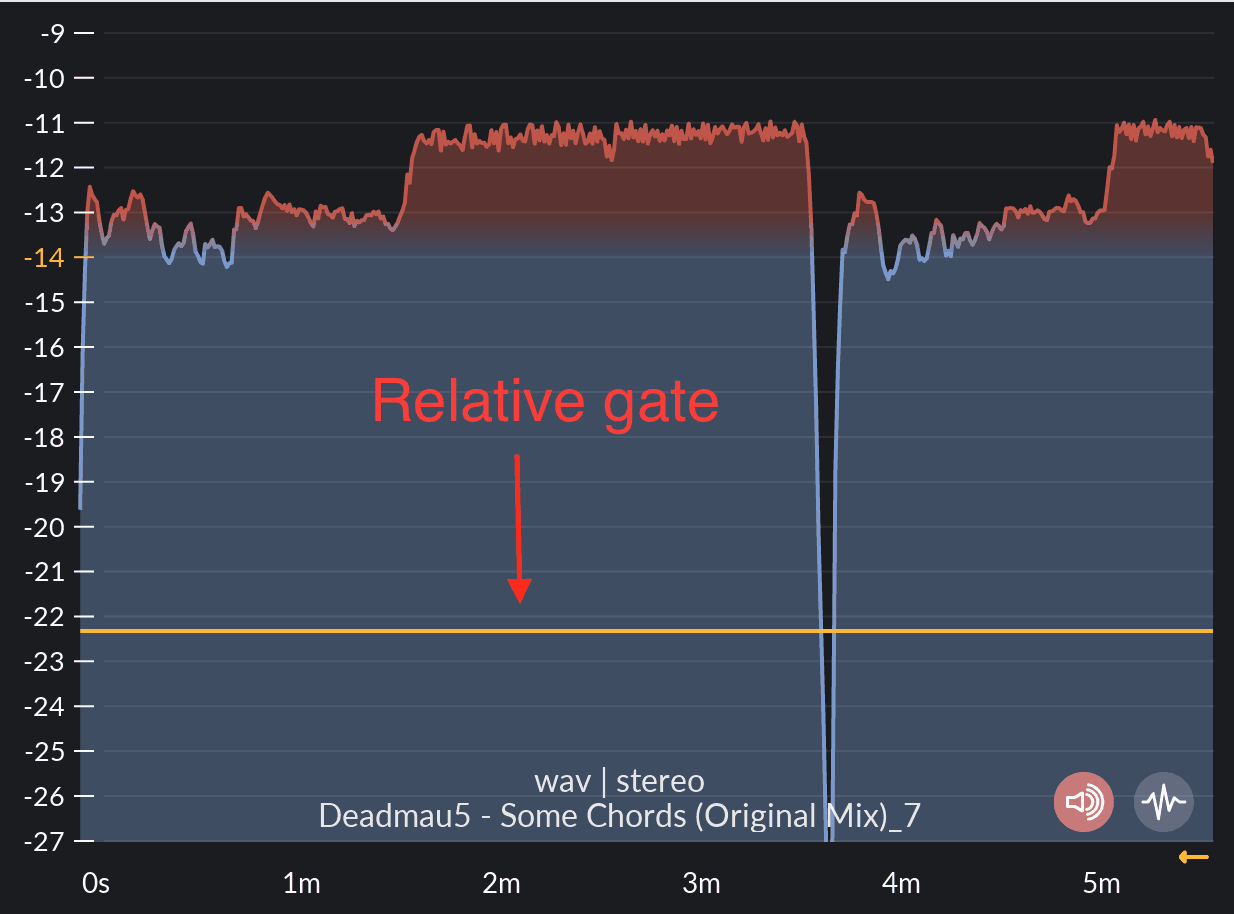 2. Find which part of the song we want to make quieter

This one will be a personal preference, but the bigger chunk you make quieter, the more pronounced the result will be.

Generally, we would leave the main part of the song, chorus, and make quieter the rest of the song. 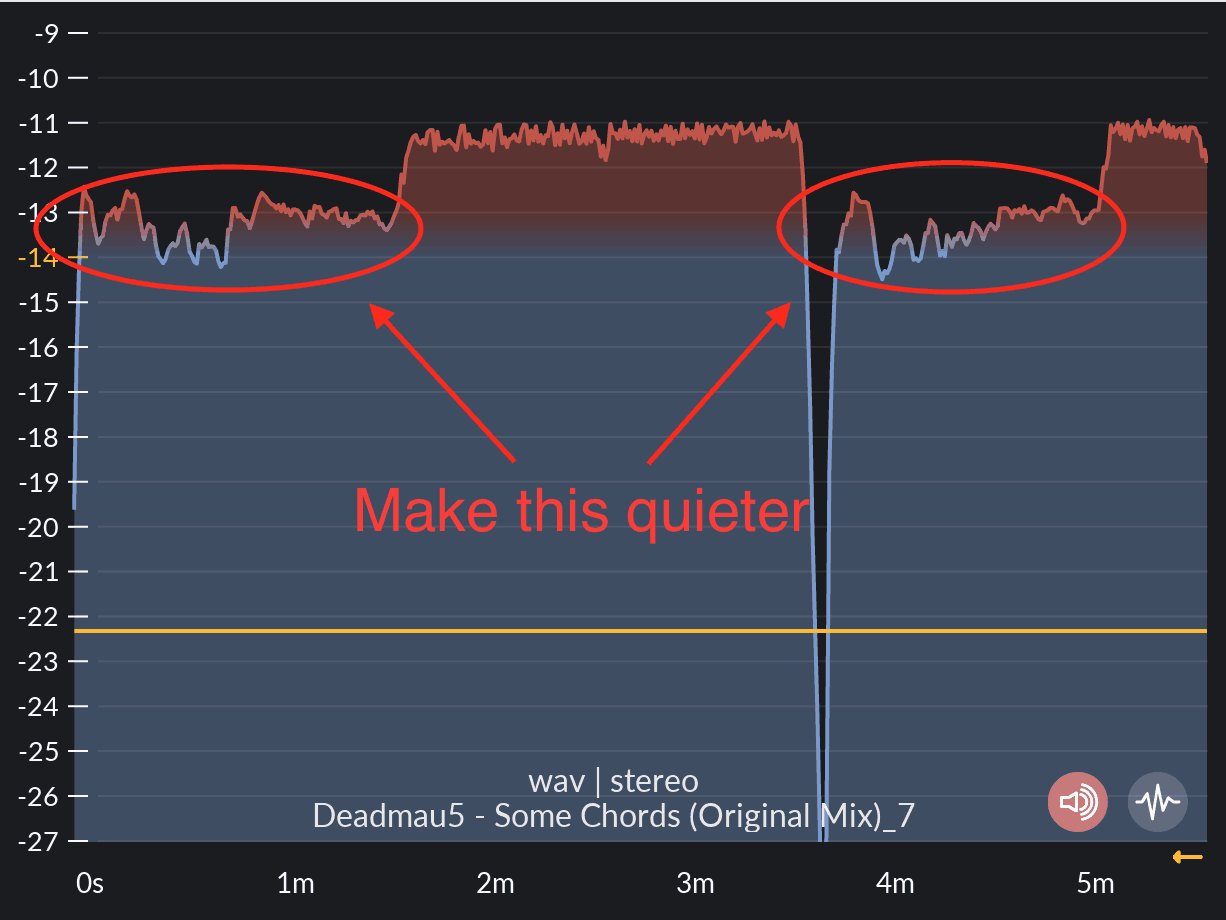 3. Find how much quieter do we want to make it

Since I am aiming for the biggest “hack”, I will make it as quiet as possible without going below the relative gate line. 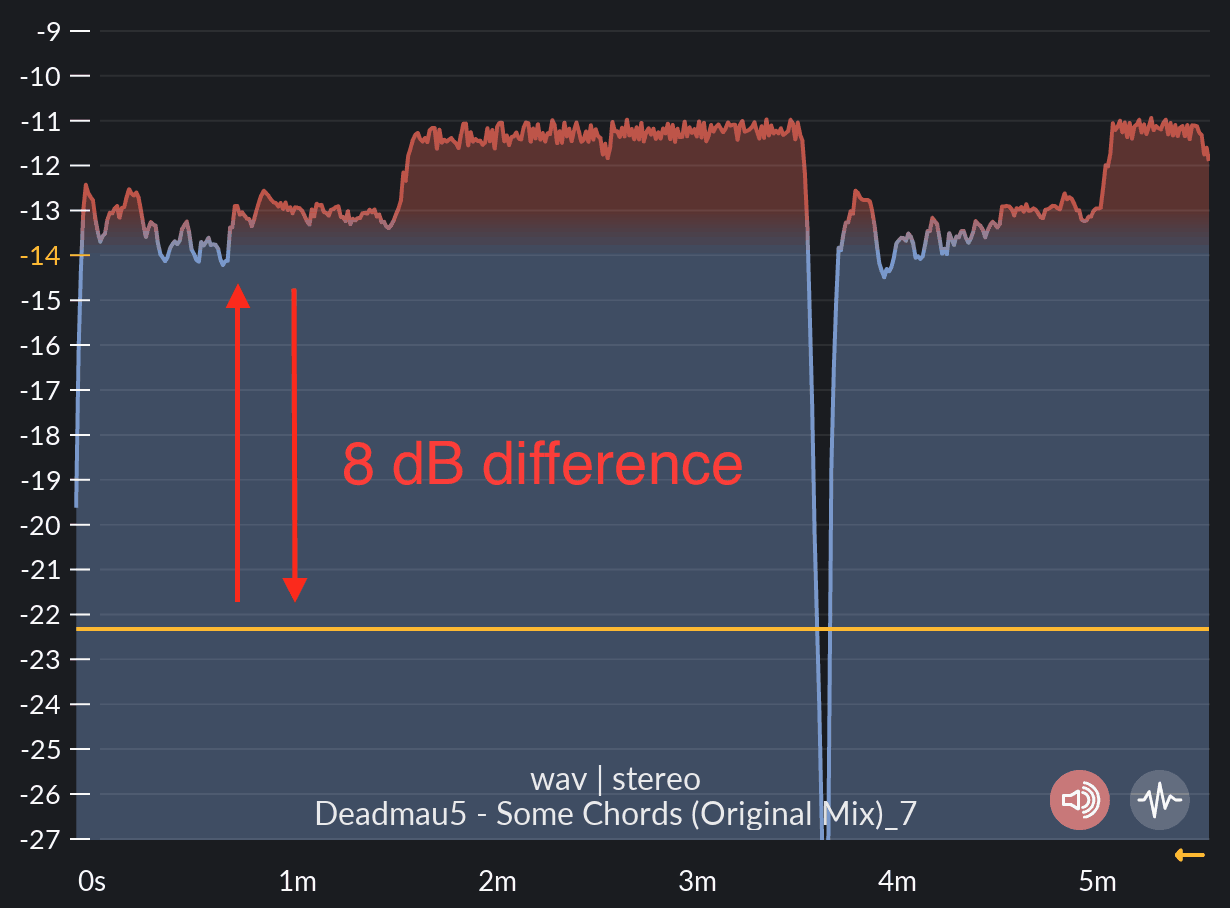 4. Now do trial and error with the relative gate

Since we have lowered the volume on some parts of the song, the relative gate will move down a bit.

You can see that it has moved to -24 LUFS, so we still have some room to make quiet parts even quieter. 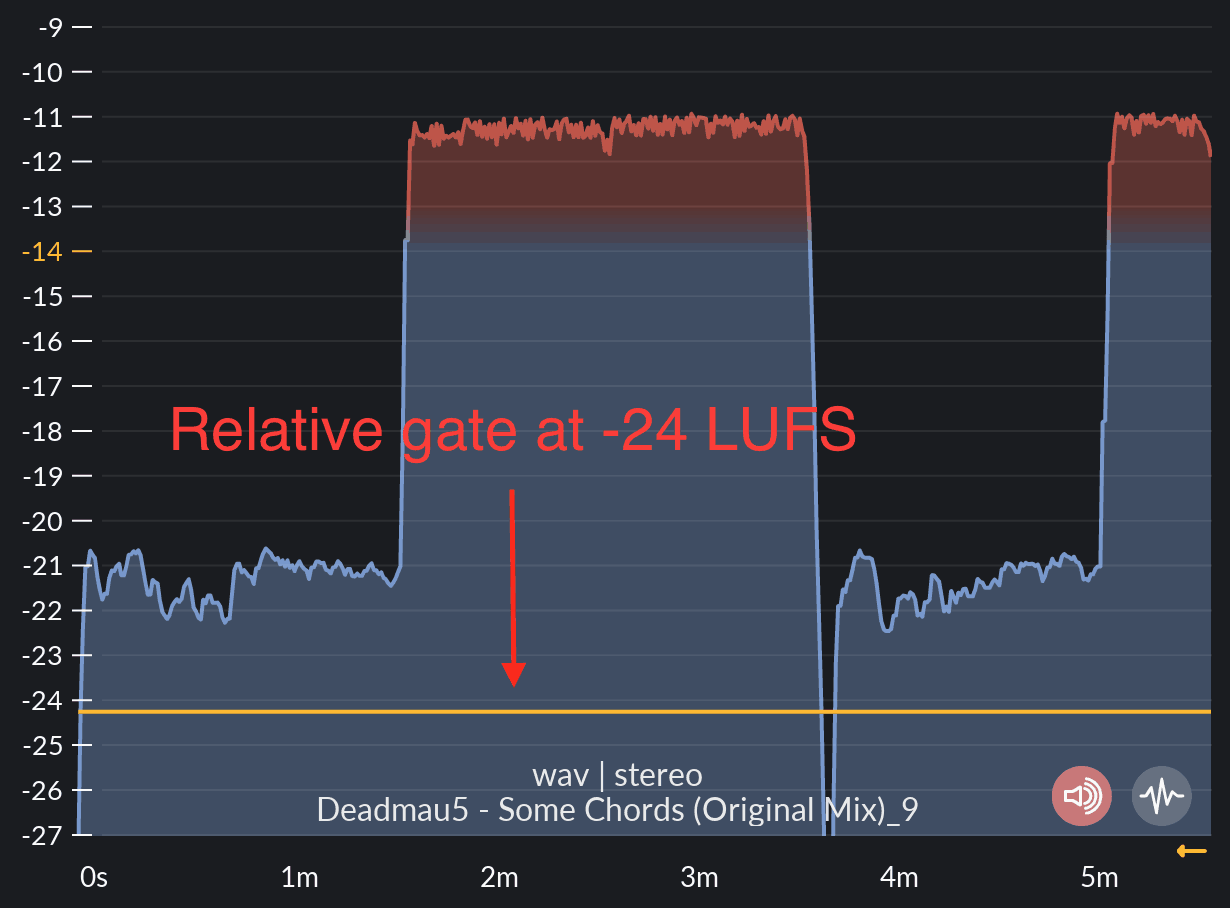 We have successfully “hacked” the LUFS algorithm.

Integrated loudness went from -12.3 LUFS to -14.3 LUFS, without changing loudness of the chorus! 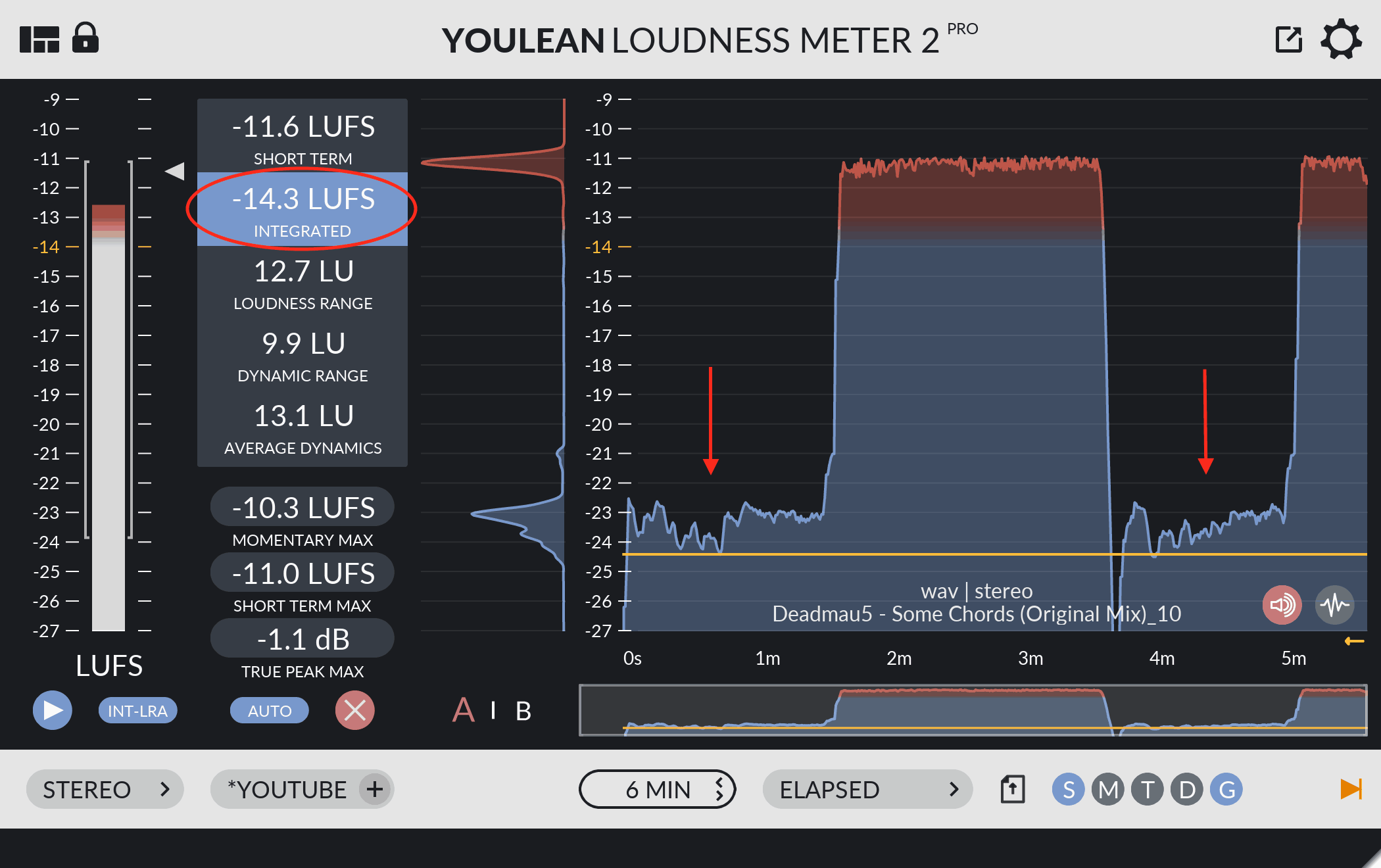 If we look at the loudness range, we will see that it went from 2.7 LU to 12.7 LU. That means that in an original song loudness difference between a chorus and the verse was just 2.7 LU, and now it is 12.7 LU which we can clearly see from this graph. 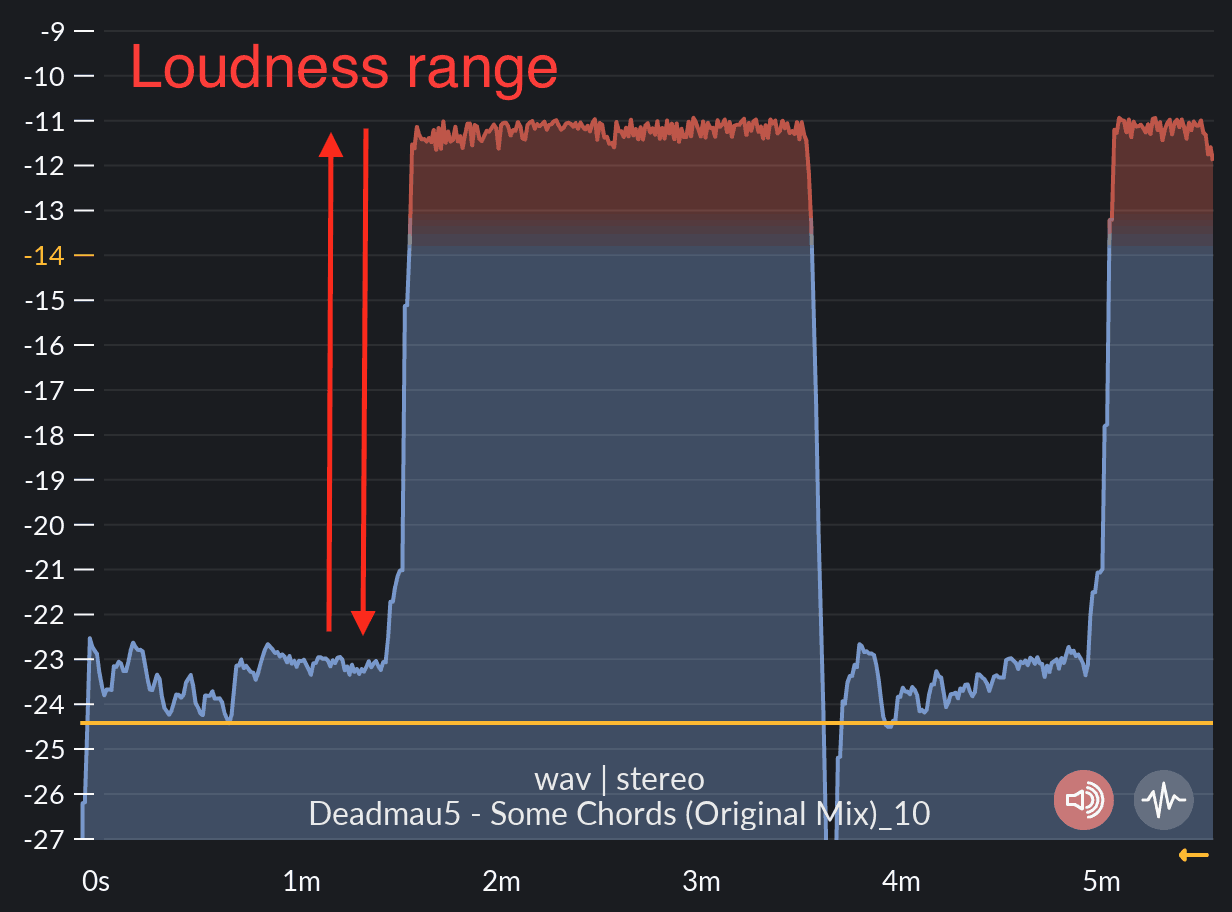 So, what have we achieved here actually?

Well, our song won’t be lowered in volume on YouTube anymore, thus this will make our chorus, or main part of the song 2 dB louder than the competition.

However, in this example, we destroyed the quieter parts of the song by making it too quiet.

This is not ideal of course.

One workaround for that would be to produce music in a way to give you less loudness in the verse parts but to sound fairly loud to us humans.

How to produce so we can have a lower loudness levels?

One part of the LUFS algorithm is the K Weight filter. That means that audio is filtered before determining how loud it is. This filter tries to mimic, but it does not exactly represent our hearing.

Playing sub-bass will much less affect the loudness compared to the high pitch tone for example. 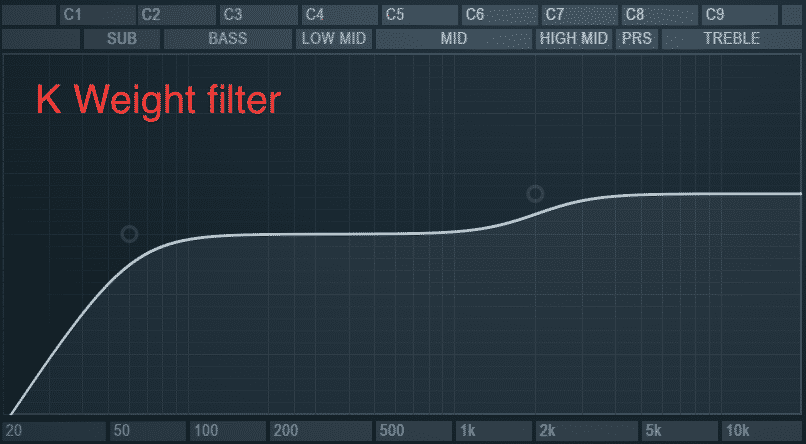 If we look at how different is K Weight filter compared to how we actually hear, we can see that filter represents our hearing really well, but there are some inconsistencies in the high end of the spectrum.

I think that this wasn’t a deal-breaker for the LUFS precision, but it did simplified filter a lot, thus making the algorithm less CPU hungry.

So if we want to take advantage of this to be quieter in LUFS, we should make sure not to have too much audio in 15 kHz and above since we can’t really hear that range very well. We should also avoid sounds from 4 kHz – 12 kHz since we can’t hear that sounds really well, but the algorithm is pronouncing that range.

Basically, if you want to fake lower LUFS levels, use parts of the spectrum where we are more sensitive than the K Weight filter. 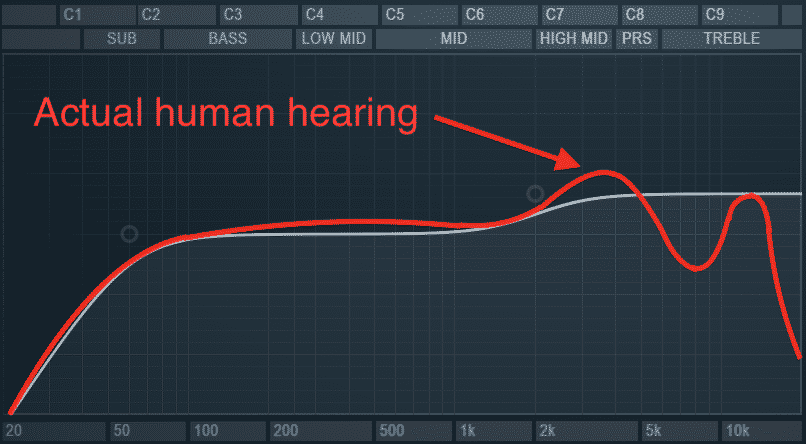 Conclusion! Should I do this hack?

If you want to master your song using this technique, in order for your chorus to be louder than the others, you should not do this! This is because you will gain just 2 LUFS, but your quiet parts of the song will be too quiet.

If you, however, want to produce a song that will take this hack into an account, you could experiment. LUFS algorithm is great, but not perfect, and there is some room for hacking.

Anyway, it seems that the LUFS algorithm is really solid, so Loudness Wars 2.0 ain’t gonna happen anytime soon, so generally, this hack is not recommend.

I hope that you learned a thing or two about how LUFS works! If you have any question, write it down. 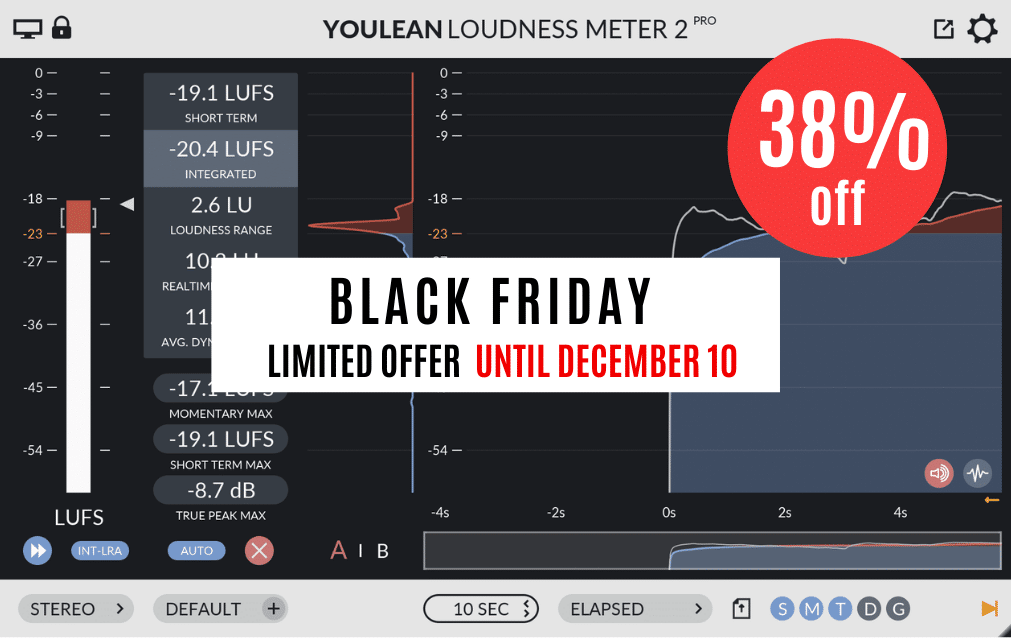